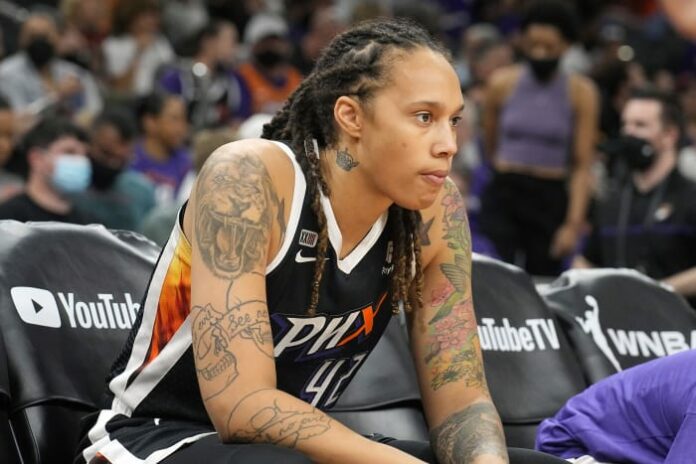 FILE – Phoenix Mercury center Brittney Griner sits during the first half of Game 2 of basketball’s WNBA Finals against the Chicago Sky, Wednesday, Oct. 13, 2021, in Phoenix. Griner is easily the most prominent American citizen known to be jailed by a foreign government. Yet as a crucial hearing approaches next month, the case against her remains shrouded in mystery, with little clarity from the Russian prosecutors. (AP Photo/Rick Scuteri, File)

The WNBA will honor Phoenix Mercury center Brittney Griner with a floor decal, a person familiar with the decision told The Associated Press on Monday night.

The person spoke on condition of anonymity because it hasn’t been announced publicly.

The All-Star center remains in Russia after being detained following her arrival at a Moscow airport on Feb. 17. Russian authorities said a search of her luggage revealed vape cartridges that allegedly contained oil derived from cannabis, which could carry a maximum penalty of 10 years in prison. She has a hearing set for May 19.

The decal will feature Griner’s initials “BG” as well as her No. 42. All 12 teams will have the decal on their home courts starting with the season opener Friday night. The Mercury open their season at home that night against the Las Vegas Aces.

ESPN first reported the news of the decal.

Commissioner Cathy Engelbert announced at the WNBA Draft that there would be a league-wide charity initiative spearheaded by the Mercury to support Griner’s philanthropic project, called BG’s Heart and Sole Shoe Drive.

Griner had one of her best seasons last year — the league’s second leading scorer and sixth in rebounds to help the Mercury reach the WNBA Finals, where they lost to the Chicago Sky.