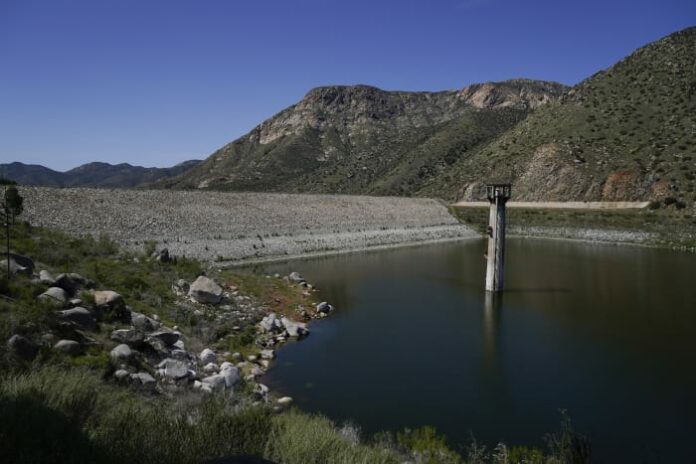 Constructed four generations ago, the massive rock and clay dam at El Capitan Reservoir is capable of storing over 36 billion gallons of water, enough to supply every resident in San Diego for most of a year.

Today, it’s three-quarters empty, intentionally kept low because of concerns it could fail under the strain of too much water.

During “a big earthquake, you never know what’s going to happen, if this is going to hold,” said Samuel Santos, a longtime resident who frequently fishes near the dam.

Seismic instability and a spillway in need of “significant repair” led El Capitan to be added to a growing list of dams rated in poor condition or worse that would likely cause deaths downstream if they failed.

An Associated Press analysis tallied more than 2,200 high-hazard dams in poor or unsatisfactory condition across the U.S. — up substantially from a similar AP review conducted three years ago. The actual number is likely even higher, although it’s unclear because some states don’t track such data and many federal agencies refuse to release details about their dams’ conditions.

The nation’s dams are on average over a half-century old and often present more of a hazard than envisioned when designed because homes, businesses or highways have cropped up below them. Meanwhile, a warming atmosphere can bring stronger storms with heavier rainfall that could overwhelm aging dams.

“All of a sudden, you’ve got older dams with a lower design criteria that now can potentially cause loss of life if they fail,” said Del Shannon, an engineer who is president of the U.S. Society on Dams.

“The number of deficient, high-hazard dams is increasing,” he said, adding that without investment in upgrades, that number will continue to rise.

Decades of deferred maintenance has worsened the problem. But a changing climate and extreme floods — such as the one that caused the failure of two Michigan dams and the evacuation of 10,000 people in 2020 — have brought a renewed focus to an often overlooked aspect of America’s critical infrastructure.

The $1 trillion infrastructure bill signed last year by President Joe Biden will pump about $3 billion into dam-related projects, including hundreds of millions for state dam safety programs and repairs.

It marks “a tremendous leap and jump of funding,” said Kayed Lakhia, director of the National Dam Safety Program at the Federal Emergency Management Agency.

Yet it’s still just a fraction of the nearly $76 billion needed to fix the almost 89,000 dams owned by individuals, companies, community associations, state and local governments, and other entities besides the federal government, according to a report by the Association of State Dam Safety Officials.

The U.S. Army Corps of Engineers lists about 92,000 dams in its nationwide database, most of which are privately owned and regulated by states. Dams are classified according to the risk posed by failure, ranging from low to significant to high. A high hazard means lives could be lost if the dam fails.

Dams also are assessed by their condition. Those in the worst shape — categorized as poor or unsatisfactory — can have a variety of problems including cracks and erosion that could undermine a dam, or spillway outlets unable to release all the water after extraordinary rainfall.

The number of high-hazard dams in poor or unsatisfactory condition has risen partly because of stricter regulation. Some state programs, infused with millions of additional dollars, have stepped up inspections, reassessed whether old dams endanger new downstream developments and worked to identify dams long ago abandoned by their owners. Some also are updating the precipitation tools used to evaluate the risks.

New York has about twice the number of high-hazard dams in poor condition as it did in 2018, when the AP collected data for its earlier analysis. The increase came as officials pushed to assess all high-hazard dams that were previously unrated.

The number of high-hazard dams in deficient condition in South Carolina rose by a third from 2018 to 2021, after lawmakers more than doubled annual funding for the state’s dam safety program. More than 70 dams failed in the state amid heavy rains in 2015 and 2016. Since then, South Carolina has ramped up staffing, undertaken more regular inspections and begun mapping potential flood zones for low-hazard dams to determine if they should be reclassified as high hazard.

“When you had a storm of that magnitude and you have it happen again the next year, and dams continue to fail, we’ve got to be able to provide a response,” said Jill Stewart, the state’s director of dam safety and stormwater permitting.

Rhode Island examined the capacity of all its dam spillways after five dams failed during a storm in 2010. A 2019 study found that a quarter of its high-hazard dams couldn’t hold up to a 100-year storm — an event with a 1% chance of happening any year — and 17% couldn’t pass a 500-year storm, which has a 0.2% chance of occurring in a year.

The state was sharing the findings with dam owners and could require some to upgrade their spillways to meet state regulations.

Many old dams “are undersized for the kind of storms that we’re getting today and will be getting in the future,” said David Chopy, administrator of the Office of Compliance and Inspection at the Rhode Island Department of Environmental Management.

Since 2019, California regulators have downgraded four of San Diego’s water supply dams from fair to poor condition because of deterioration and concerns they could fail because of an earthquake or extraordinary rainfall. As a result, the high-hazard dams at El Capitan, Hodges and Morena reservoirs all are restricted to holding less than half their capacities. The dam at Lower Otay Reservoir, also high hazard and in poor condition, is not restricted.

The lower water means Santos, who has been coming to El Capitan Reservoir since childhood, can’t find relief from shade trees when he fishes from the receding banks. His children don’t want to join him because it’s so hot.

“It’s sad to see it, because it’s just like a duck pond compared to what it used to be,” said another longtime resident, Bob Neal, who said his father-in-law helped build the dam in the 1930s.

The dam’s poor condition also means less water is stored to prepare for drought, which has become particularly severe in the West. San Diego gets an average of just 10 inches of rain annually.

“These reservoirs are very important,” said Republican state Sen. Brian Jones, whose district includes the El Capitan and Lake Hodges dams. “We need to start spending the money on them to retrofit them, to get them up again back to full capacity.”

Jones is among several lawmakers pushing the state to carry out a 2014 ballot proposition that authorized billions of dollars for reservoir projects. San Diego’s mayor also has urged the state to allot at least $3 billion for dam repairs statewide.

For many dams, problems develop gradually and risks can be reduced by temporary measures, such as lowering water levels, until repairs can be made, said Ryan Stack, chief engineer at Missouri’s dam safety program.

“Unsatisfactory doesn’t necessarily mean helicopters and bells-and-whistles and everything going off for an immediate crisis,” Stack said.

But the risk from old, inadequate dams has become painfully evident in recent years.

In 2019, a rural Nebraska dam failed under extreme pressure from a raging flood of ice chunks, killing a man whose home was beneath the dam. An independent investigation determined that state regulators should have classified the dam as “high hazard,” which could have led to a plan to increase its flood capacity and better warn residents downstream. The public utility that owned the dam agreed this year to a $2.5 million settlement for the man’s family while a lawsuit continues against the state.

In 2020, central Michigan’s Edenville Dam also failed following heavy rainfall. The rupture unleashed a torrent on the Tittabawassee River, leading to the failure of Sanford Dam and damaging two other downstream dams. More than 10,000 people were evacuated.

The high-hazard Edenville Dam, built in 1924, had been rated in unsatisfactory condition in 2018 and lost its federal hydropower license due to a variety of issues, including a spillway incapable of standing up to a severe flood.

An investigatory report released Wednesday found that Edenville dam had deficiencies that could have been been caught and corrected. Rather than blaming any particular person or organization, investigators cited shortcomings in “the overall system for financing, designing, constructing, operating, evaluating, and upgrading the four dams” over nearly 100 years.

After the dam failures, Michigan beefed up its 2022 budget with $19 million for dam safety, plus money to hire more regulatory staff. Democratic Gov. Gretchen Whitmer recently signed legislation providing an additional $250 million for dams, including about $200 million to repair those damaged by the 2020 floods.

The plan prioritizes high-risk dams “that can be ticking time bombs if they are not addressed,” said state Rep. Roger Hauck, a Republican whose district experienced flooding from the dam failures. “Dragging our feet or failing to get it done will only open the door to other catastrophes down the line.”

Other states also are pumping more money into dam safety. After Kansas exempted thousands of dams from state regulation in 2013, its allotment of annual federal dam safety funds plunged, leading to a decline in staffing and delays in handling permits and inspections. A budget passed by the Legislature this year will double state funding and staff for the dam safety office.

Addressing the problems posed by old, unsafe dams can be challenging. Repairs can be costly and take years to complete. Attempts to remove dams — and empty the lakes they hold back — can spawn legal battles and a public outcry from those who rely on them for recreation or to sustain nearby property values.

A pair of high-hazard dams built in the mid-1800s near Cleveland are among those in need of major repair. Upper Shaker Lake, commonly known as Horseshoe Lake, was drained as a precaution after it developed sinkholes and cracks. The cities of Cleveland Heights and Shaker Heights, which jointly manage the dams, last year approved a $28.3 million plan to remove Horseshoe Lake Dam, return the area to a free-flowing stream and rebuild Lower Shaker Lake Dam.

But the plan faces backlash from community members who formed a nonprofit to try to save Horseshoe Lake. They hired a law firm and engineering company, launched a fundraising drive and gathered about 2,000 online petition signatures.

“The lake is a beautiful, calming feature that is the central park of the Heights neighborhood,” said musician Bert Stratton, a resident helping to lead the efforts. “It’s where people come to congregate, and they have for over 100 years.”

“People need to understand there is a major risk at this facility,” including the “probable loss of life if the dam blew out,” said Frank Greenland, the district’s director of watershed programs.

Decades of procrastination on repairs has led to the deterioration of other dams across the country. Some owners find it difficult to justify the costs of improving structures without facing an emergency.