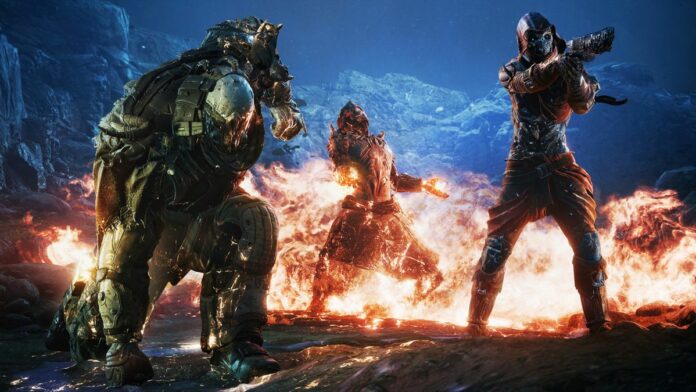 Outriders developer People Can Fly has revealed the team hasn’t received any royalties since its gory looter shooter launched last year. And the game hasn’t earned publisher Square Enix a profit either.

In its most recent financial report, People Can Fly explains it’s “entitled to royalties” if Square Enix recovers enough of its costs. , But as of December 31, it has received no royalties for Outriders. This means “net proceeds from the sale of Outriders were insufficient to recover the costs and expenses incurred by the publisher to develop, distribute and promote the title.”

It’s a genuine shame to hear Outriders hasn’t been more of a success for People Can Fly. On the surface, the game appears to be a drab co-op shooter set in a generic sci-fi world. But the team has made a punchy co-op shooter full of silly fun. Its classes have a suite of ridiculously powerful abilities that can turn your enemies into bloody mulch. A favorite of mine is the Devastator because they can turn themselves into a meteorite and plummet down onto an enemy bursting them into a heavy mist of gizzards.

Outriders looked like it may have become a sleeper hit after it launched on Xbox Game Pass and picked up a sizeable initial audience. Especially as – according to Steam Charts – more than 100,000 people were playing at once on the platform. Clearly, that popularity didn’t convert into profits.

Square Enix has had a string of high-profile misses in recent years – most notably Marvel’s Avengers, its huge service game developed by Crystal Dynamics. After years of development, the Avengers looked like it could be as successful as Sony’s Spider-Man games. But it launched to middling reviews and low player numbers. In its 2021 financial report, Square Enix admitted it had “not proven as successful” as it would have liked.

The publisher didn’t have much luck with its Guardians of the Galaxy game either. In a financial report, Square Enix said that “Despite strong reviews, the game’s sales on launch undershot our initial expectations.” Though, it goes on to add that sales continue to grow.

While it wasn’t Square Enix’s biggest title, Babylon’s Fall is perhaps its most galling failure. Earlier this year, the co-op RPG practically emptied of players a month after launch, seeing its numbers on Steam drop to just eight people.

Perhaps off the back of all this, it’s easier to understand why Square Enix began this week by announcing it intends to sell a significant number of its studios and back catalog to an investment group. Not only will the sale include Crystal Dynamics, Eidos Monreal, and Square Enix Montreal – the teams behind the Tomb Raider reboot, the Deus Ex Reboot, and the publisher’s Marvel games – but also the rights to the Tomb Raider, Deus Ex, Thief, and Legacy of Kain games.

The sale is still in progress, but the silver lining is that we may see new life for some of those well-loved series from the teams that created them, rather than being passed off to new studios with no connection to the properties.

Not the end of Outriders

There is also good news for Outriders fans. Even if the game hasn’t seen a profit, People Can Fly is still developing new content for Outriders with the Worldslayer expansion.

To me, strangely, what stands out the most is the new Apocalypse tiers; a system that lets you significantly increase the difficulty for you and your friends. I usually don’t like my games too tricky, but if I can share the challenge, it makes for a much more enjoyable experience when it comes to a co-op shooter.