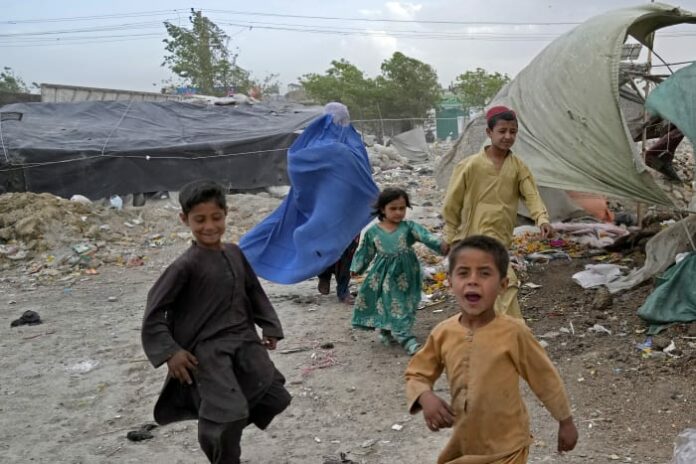 KABUL – Arooza was furious and afraid, keeping her eyes open for Taliban on patrol as she and a friend shopped Sunday in Kabul’s Macroyan neighborhood.

The math teacher was fearful her large shawl, wrapped tight around her head, and sweeping pale brown coat would not satisfy the latest decree by the country’s religiously driven Taliban government. After all, more than just her eyes were showing. Her face was visible.

Arooza, who asked to be identified by just one name to avoid attracting attention, wasn’t wearing the all-encompassing burqa preferred by the Taliban, who on Saturday issued a new dress code for women appearing in public. The edict said only a woman’s eyes should be visible.

The decree by the Taliban’s hardline leader Hibaitullah Akhunzada even suggested women shouldn’t leave their homes unless necessary and outlines a series of punishments for male relatives of women violating the code.

It was a major blow to the rights of women in Afghanistan, who for two decades had been living with relative freedom before the Taliban takeover last August — when U.S. and other foreign forces withdrew in the chaotic end to a 20-year war.

A reclusive leader, Akhunzada rarely travels outside southern Kandahar, the traditional Taliban heartland. He favors the harsh elements of the group’s previous time in power, in the 1990s, when girls and women were largely barred from school, work and public life.

Akhunzada has taken tribal village traditions where girls often marry at puberty, and rarely leave their homes, and called it a religious demand, analysts say.

The Taliban have been divided between pragmatists and hardliners, as they struggle to transition from an insurgency to a governing body. Meanwhile, their government has been dealing with a worsening economic crisis. And Taliban efforts to win recognition and aid from Western nations have floundered, largely because they have not formed a more representative government, and restricted the rights of girls and women.

Until now, hardliners and pragmatists in the movement have avoided open confrontation.

Yet divisions were deepened in March, on the eve of the new school year, when Akhunzada issued a last-minute decision that girls should not be allowed to go to school after completing the sixth grade. In the weeks ahead of the start of the school year, senior Taliban officials had told journalists all girls would be allowed back in school. Akhunzada asserted that allowing the older girls back to school violated Islamic principles.

A prominent Afghan who meets the leadership and is familiar with their internal squabbles said that a senior Cabinet minister expressed his outrage over Akhunzada’s views at a recent leadership meeting. He spoke on condition of anonymity to speak freely.

Torek Farhadi, a former government adviser, said he believes Taliban leaders have opted not to spar in public because they fear any perception of divisions could undermine their rule.

“The leadership does not see eye to eye on a number of matters but they all know that if they don’t keep it together, everything might fall apart,” Farhadi said. “In that case, they might start clashes with each other.”

“For that reason, the elders have decided to put up with each other, including when it comes to non-agreeable decisions which are costing them a lot of uproar inside Afghanistan and internationally,” Farhadi added.

Some of the more pragmatic leaders appear to be looking for quiet workarounds that will soften the hard-line decrees. Since March, there has been a growing chorus, even among the most powerful Taliban leaders, to return older girls to school while quietly ignoring other repressive edicts.

Earlier this month, Anas Haqqani, the younger brother of Sirajuddin, who heads the powerful Haqqani network, told a conference in the eastern city of Khost that girls are entitled to education and that they would soon return to school — though he didn’t say when. He also said that women had a role in building the nation.

“You will receive very good news that will make everyone very happy… this problem will be resolved in the following days,” Haqqani said at the time.

In the Afghan capital of Kabul on Sunday, women wore the customary conservative Muslim dress. Most wore a traditional hijab, consisting of a headscarf and long robe or coat, but few covered their faces, as directed by the Taliban leader a day earlier. Those wearing a burqa, a head-to-toe garment that covers the face and hides the eyes behind netting were in the minority.

Arooza said the Taliban rulers are driving Afghans to leave their country. “Why should I stay here if they don’t want to give us our human rights? We are human,” she said.

Several women stopped to talk. They all challenged the latest edict.

“We don’t want to live in a prison,” said Parveen, who like the other women wanted only to give one name.

“These edicts attempt to erase a whole gender and generation of Afghans who grew up dreaming of a better world,” said Obaidullah Baheer, a visiting scholar at New York’s New School and former lecturer at the American University in Afghanistan.

“It pushes families to leave the country by any means necessary. It also fuels grievances that would eventually spill over into large-scale mobilization against the Taliban,” he said.

After decades of war, Baheer said it wouldn’t have taken much on the Taliban’s part to make Afghans content with their rule “an opportunity that the Taliban are wasting fast.”