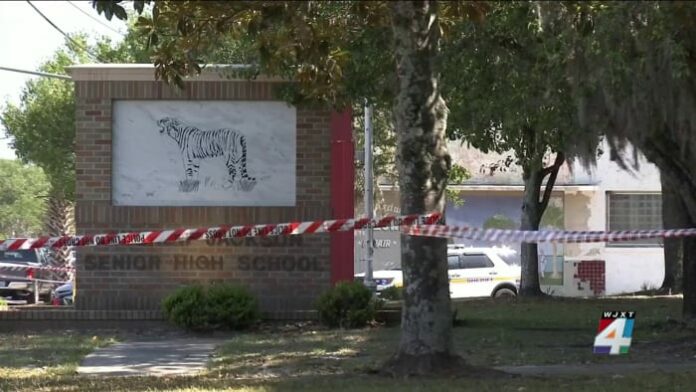 A 911 call to police indicated the teen who was shot was brought to the front office to wait for help. JSO said they expect the 17-year-old to be okay.

School dismissal looked a lot different Thursday afternoon than Wednesday. Everyone was safe and police were spotted outside the school all day. There is also a Crime Stoppers sign on the sidewalk.

Students told News4JAX that they felt fine coming back to school with all the extra security. They were met with more officers and bag checks. One student said, “It was kind of down today like the whole school was sad and shocked.”

Another student said, “I’m not scared but I am worried because he was my friend.”

Detectives are searching for a light-colored SUV that was involved in the drive-by shooting outside the school. Police say someone shot the teen as he was walking on the sidewalk.

A neighbor who didn’t want to be identified said, “I heard the shots, multiple shots and I knew they were not firecrackers. I observed the children running in fear. It was chaotic. The parents were in fear and afraid.”

The friend went on to say, “What I would want him to know is that we’re waiting on him and I hope he is ok.’

District police say they do have upgraded security at the school for the foreseeable future. At this time, no arrests have been made.