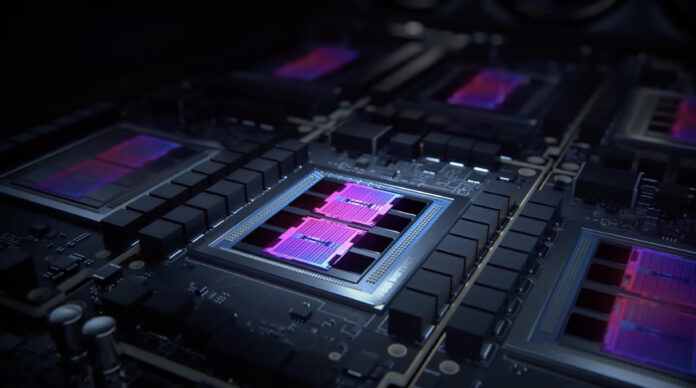 In brief: AMD’s RDNA 3 GPUs are expected to break cover sometime later this year. Rumors around the new designs have started pouring as of late, and one of them suggests Team Red is returning to chiplet designs with the RX 7000 series.

The last time AMD played with the chiplet design concept in consumer desktop GPUs was back in the Vega era, with the Vega 56/64 and the decidedly prosumer-oriented Radeon VII. Those cards never really took off with gamers, so the company went back to monolithic designs for its Navi (RX 5000 series) and Big Navi (RX 6000 series) GPUs.

However, the rumor mill is abuzz again with hints that AMD may be returning to the chiplet GPU game with RDNA 3 designs. According to reliable leaker Greymon55, Team Red’s next-generation GPUs could come in packs of up to seven chiplets.

We already know that AMD is going to tap TSMC for the manufacturing of these new GPUs, but Greymon55 seems to believe the company will go with a mix of process nodes for the various chips involved. For instance, the Navi 31 GPU may be comprised of two 5nm Graphic Complex Dies (GCD), four 6nm Memory Complex Dies (MCD), and an interconnect controller die.

At this point, it’s not clear if these are vertically stacked and whether the rumored 512 megabytes of Infinity Cache will reside in those four MCD modules. Either way, going with a chiplet design will no doubt help with yields, which are known to be worse on 5 nm and 4nm process nodes.

Other rumors indicate that the flagship RDNA 3 GPU could sport a whopping 15,360 cores paired with 32 gigabytes of GDDR6 memory. Additionally, the mid-range RX 7700 might end up close to the RX 6900 XT in terms of performance, which would be a remarkable generational improvement.

Meanwhile, Nvidia is readying its Ada Lovelace GPUs, which will be monolithic designs with a wider, 384-bit memory bus and some scary power requirements. According to people who dug through the leaked data from the Lapsus$ hack, Team Green might even take a page from AMD’s book and increase the size of the L2 cache on its RTX 40 series GPUs to as much as 96 megabytes — up to 16 times more than Ampere GPUs.

If all goes well, RDNA 3 cards will launch later this year, hopefully in a better climate where the supply chain isn’t in a constant struggle to secure essential materials and components and keep factories operational.