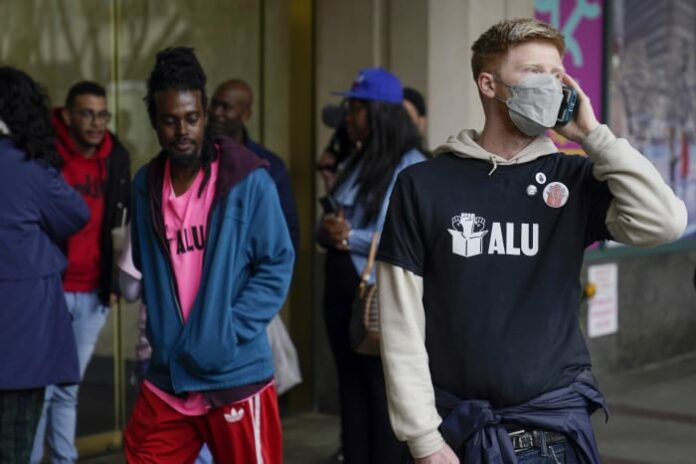 Amazon workers at a warehouse on New York City’s Staten Island overwhelmingly rejected a union bid on Monday, dealing a blow to organizers who last month pulled off the first successful U.S. organizing effort in the e-commerce giant’s history.

This time around, warehouse workers cast 618 votes — or about 62% — against the union, giving Amazon enough support to fend off a second labor win and raise questions as to whether the first victory was just a fluke.

According to the National Labor Relations Board, which oversees the process, 380 workers — or 38% — voted in favor of the grassroots union. Turnout was 61%, with about 1,600 workers eligible to vote, according to a voter list provided by Amazon.

The few ballots that were challenged by either the company or the nascent Amazon Labor Union, which led the organizing effort, were not enough to sway the outcome. Both parties have until next Monday to file objections. The ALU is weighing whether to object, said Seth Goldstein, a union attorney who provides pro-bono legal assistance to the group.

Amazon spokesperson Kelly Nantel said the company was glad workers at the warehouse “were able to have their voices heard.”

“We look forward to continuing to work directly together as we strive to make every day better for our employees,” Nantel said.

A separate election held last month gave the ALU a surprise victory when workers at a different Staten Island facility voted in favor of unionizing. That was a first for Seattle-based Amazon in the U.S.

For the union, Monday’s defeat will surely sting. A second labor win was expected to fuel more organizing at the nation’s second largest employer, and cement the power and influence of the ALU.

But despite the momentum after the first win, it was unclear whether the group would be able to replicate its success. Organizers said they had lost some support at the warehouse after filing for an election in February because they directed more energy to the nearby facility that voted to unionize last month. There were also fewer organizers working at the warehouse — roughly 10 compared with the nearly 30 employed at the other warehouse.

Some experts believed part-time workers, who organizers say the smaller facility relies on heavily, would potentially offer less union support because they might have other sources of income outside Amazon.

Kate Andrias, professor of law at Columbia University and an expert in labor law, said it can also be harder to organize part-time workers because they “have less of a stake in improving the workplace” and “may be less likely to have strong relationships with co-workers.”

Despite the loss, Chris Smalls, the fired Amazon worker who leads the ALU, wrote on Twitter Monday that he was proud of the organizers who participated, saying they had a tougher challenge after the group’s prior win.

“Nothing changes we organize!” Smalls tweeted. “do not be discouraged or sad be upset and talk to your coworkers”

The same obstacles that plagued the effort the first time, including Amazon’s aggressive anti-union tactics, were at play again. In the lead-up to the election, Amazon continued to hold mandatory meetings to persuade its workers to reject the union effort, posted anti-union flyers and launched a website urging workers to “vote NO.”

Goldstein, the attorney working with the ALU, argues Amazon stepped up its “union-busting” campaign after the last election, disciplined organizers for engaging in union activities and barred them from displaying a pro-union sign in the breakroom. The union is also taking issue with the retailer’s use of mandatory anti-union meetings for its workers. The NLRB has allowed companies to mandate such meetings, but the labor board’s top prosecutor is currently trying to get them outlawed.

Kent Wong, the director of the UCLA Labor Center, anticipated that there will be setbacks and victories in organizing Amazon. He contrasted it to Starbucks, where several stores have voted to unionize. Wong noted Amazon’s famously high turnover rate makes it hard to organize and unlike individual Starbucks locations, with 15 to 20 workers, there are far more workers at each Amazon warehouse who must be persuaded to form a union.

“This one setback is not going to stall the momentum,” Wong said. “But if Amazon can block three or four or five in a row, it will be a message to other Amazon workers, it is going to be really hard.”

John Logan, director of labor and employment studies at San Francisco State University, said he wasn’t entirely surprised by the union’s loss. He said he believes that the ALU was stretched thin. A second union victory would have solidified the union’s position, he said, but the results in many ways were more important to Amazon than the fledgling labor group.

“A second defeat could have proved fatal to the company’s efforts to stop the organizing from spreading like wildfire, just as it has done at Starbucks,” Logan said. But he noted there’s no question that “the ALU’s organizing campaign will continue and that labor activism at Amazon will continue to spread across the country.”

Andrias said she believes the loss “highlights the fundamental problems with labor law and the extent to which employers are able to exercise coercive power over workers during the course of these union campaigns.”

Even after a victory is secured, it’s still an uphill battle. Amazon has disputed the first election organized by the ALU, arguing in a filing with the NLRB that the vote was tainted by organizers and by the board’s regional office in Brooklyn that oversaw the election. The company says it wants a new election, but union supporters believe it’s an effort to delay contract negotiations and potentially blunt some of the organizing momentum. A separate NLRB regional office in the Southwest will hold a hearing later this month over the company’s objections.

Meanwhile, the final outcome of a separate union election in Bessemer, Alabama, is still up in the air with 416 outstanding challenged ballots hanging in the balance. Hearings to review those ballots are expected to begin in the coming weeks.