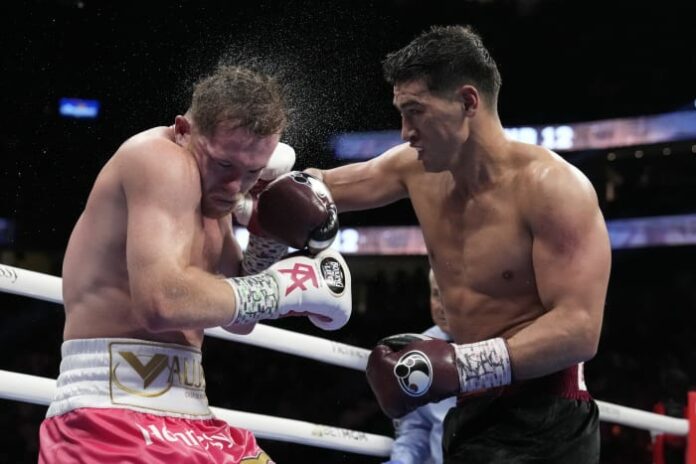 LAS VEGAS – Canelo Alvarez paused on his way to the ring to pose with his right fist high in the air, basking in the adulation of thousands of his frenzied fans expecting nothing more on this Cinco de Mayo weekend than another big win by a fighter already considered one of Mexico’s all-time greats.

He left 12 rounds later with his first loss in nine years, seemingly as stunned by the unexpected outcome as the sold-out crowd that came to watch.

Dmitry Bivol didn’t just beat Alvarez Saturday night at the T-Mobile Arena on the glittering Strip. He gave him a beating in a light heavyweight fight that wasn’t nearly as close as the identical 115-113 cards turned in by the three ringside judges.

And now the questions begin. Did Alvarez take too big of a risk moving up to 175 pounds to take on a tough champion in Bivol? Did the loss to the Russian damage the legacy Alvarez has built in the last decade along with his status as the best pound-for-pound fighter in the world?

And, perhaps more importantly, what becomes of his third fight with Gennadiy Golovkin, a long-awaited mega bout that now surely won’t be happening in September as planned, if at all?

No, one bad night may not wreck Alvarez’s career. He has accomplished way too much for that.

But after perhaps his worst outing as a pro, there’s work to be done before he’s talked about in such elevated terms again.

“You have to expect it. It is boxing. No excuses,” said Alvarez, who hadn’t lost in 16 fights since dropping a decision in 2013 to Floyd Mayweather Jr. “I lost today and he won. He’s a really good fighter.”

Bivol was more than that on this night. He was a bigger, slicker fighter who did what Alvarez usually does to his opponents — impose his will on the man across the ring from him.

A 5-1 underdog despite being an undefeated champion, Bivol consistently beat Alvarez to the punch and wasn’t afraid to trade inside with him. He was credited with landing 152 punches to just 85 for Alvarez, and out landed him in every round.

Fighting at 175 pounds always seemed a stretch for Alvarez, who beat Sergey Kovalev in his only other bout at light heavy. Fighting an unbeaten 175-pound champion turned out to be a bridge too far.

“We talked going into this fight how good Dmitry Bivol is, how tough this fight was and it was a punch-perfect performance,” said Eddie Hearn, who promotes Alvarez. “He had to box exactly the way he did to win the fight. Did Canelo look a little bit flat? Did he look tired? I think it was the brilliance of Dmitry Bivol.”

Alvarez admitted in the week before the fight that he was taking a big chance against Bivol but wanted fights that challenged him. Acutely aware of his legacy — particularly in Mexico — he was confident he could wear Bivol down over the course of the fight, just as he did before knocking Kovalev out in the 11th round of their 2019 fight.

But Kovalev was an aging fighter who was on the downside of his career. Bivol, on the other hand, was unbeaten and had never been in the kind of ring war that wears fighters down.

Instead, it was Alvarez who was marked up and looked the worse for wear when the bell sounded to end the final round. Alvarez said afterward he thought he did enough to win the bout, but the only real question for those watching in the arena and on pay-per-view was how much the judges might be swayed by Alvarez’ reputation and the screams of his supporters every time he landed a punch.

The judges got it right, but barely. Perhaps intimidated by the crowd, they scored the first four rounds for Alvarez even as Bivol kept landing more punches. Curiously, all three had every round scored the same, something unheard of in any fight, much less a big championship bout.

And if all three hadn’t given the last three rounds to Bivol, Alvarez would have escaped to fight another night with his huge fight planned for September with Golovkin still intact.

“Sorry I broke your plans with Gennadiy Golovkin,” Bivol said.

Now there will be new plans, including a possible rematch that Alvarez was talking about even before he left the ring.

Yes, he lost. But even in a bad loss there’s always a path forward.