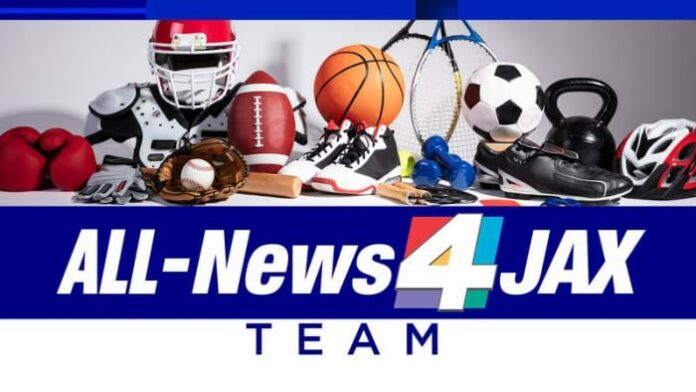 Improvement is one that she lives by.

There’s a constant drive to get better and a fierce determination to get there for Scott, the All-News4JAX girls basketball player of the year.

She put up staggering numbers in her first season at St. Johns Country Day, finishing with a 31.5-point per game scoring average. That number ranked first in the state and 11th in the country.

And that was even with an injured right wrist that needed offseason medical attention.

How did Scott celebrate such a milestone? In the most Taliah Scott way possible — by planning to work harder, of course. There’s no time to admire the stats or the Class 2A player of the year award that she earned after the season. There is, however, work to be done.

“Thirty-one [points] a game. You know, that’s really good. You don’t see most people doing that. But as always, there’s always room to improve. For example, like we’re trying to now, like we know I can make shots you know, I can make them a high percentage but we’re trying to get that even higher,” she said.

“… Like on defense, just making sure I’m more like I’m in the zone, I guess, more to say, on defense. But really, there’s still a lot of ways I can get better. Just tighten up on certain things is now where we’re at.”

Scott’s career has been well documented. She was a known player before she hit high school and has improved every season. Scott is rated as the ninth-best prospect in the Class of 2023 by ESPNW’s HoopGurlz and committed to Arkansas.

The big change this year was a change of scenery, from Class 7A Oakleaf to the 2A Spartans. Those expectations increased, too. Would teams be able to throw double and triple teams at Scott, shut her down and force the rest of the Spartans to step up?

“When you move down [in classification], people say it gets easier. But really, it’s about like the teamwork, the connectivity, which is really what I felt like helped. I feel like me and my teammates were always on the same page,” she said.

“I felt like they allowed me to excel and when I did, and also felt like I allowed them to excel in what they did. And so, really it just came down to how compact you are and how much trust you have as a team, which I felt like we really had a lot of that, which allowed each and every one of us to exceed in our different roles, and for me, it was scoring.”

St. Johns allowed Scott the opportunity to do what she does best, score. She wasn’t afraid to let it rip. And when Scott was in her rhythm, there wasn’t a defense that could slow her down. She had five games of scoring in the 40s and two in the 50s.

Scott isn’t shy about her goals for 2023 and beyond. Already rated as one of the best high school players in the country, Scott said she wants to be Miss Basketball, the Gatorade Player of the Year and a McDonald’s All-American.

The larger goal — to win the Class 2A state championship.

She only played here two seasons and she was an All-News4JAX first-team pick in each. Averaged 19.8 points, 6.2 rebounds, 4.9 assists and 4.2 steals per game. The unquestioned emotional and on-court leader of Nease’s 25-5 season that reached the state semifinals. Finished her career with 2,444 points (1,139 at Nease, 1,305 in two seasons in New York).

Dominant player on both ends of the court. Averaged a double-double (14.8 ppg, 13.6 rpg) for the second consecutive year. The Yellow Jackets were 68-10 over the final three seasons with Jackson in the lineup and reached the state semis last year.

Averaged career-best 18.4 points and 6.7 rebounds per game for Knights. Has scored 1,111 points in her career and averaged double figures her three seasons.

Player of the year is a three-time All-News4JAX first-team selection. Has boosted production every season (582 points to 585 to 662) of her career. Averaged state-leading 31.5 points, 6.2 rebounds per game. Class 2A player of the year and finished fourth in Miss Basketball balloting. Arkansas commit. Has 1,829 career points.

G Olivia Brown, Florida School for the Deaf and the Blind, Sr.

C Kayla Debrow, Florida School for the Deaf and the Blind, Fr.