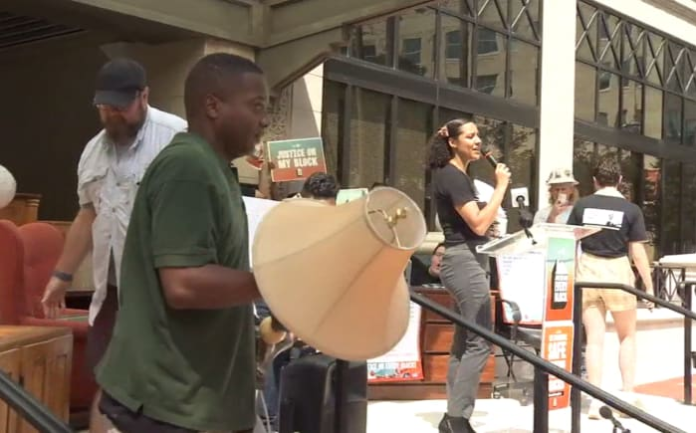 JACKSONVILLE, Fla. – An affordable housing rally downtown was disrupted on Sunday when city workers took props from the rally and threw them away.

During the rally, activists set up dressers, mattresses and other furniture to resemble people getting evicted and thrown out onto the streets.

News4JAX asked the city why workers took the props and Chief Administrative Officer Brian Hughes said it was because citizens can’t block the entrances of public buildings.

As the rally was underway city workers pulled up in trucks and started removing the furniture from in front of City Hall.

State representative Angie Nixon said officials gave the activists permission to be in front of City Hall so she said she was surprised it happened.

“To call city workers in and pay them over time instead of making sure that our parks are clean are drainage problems are fixed the flooding issues are stopped they decided to do this because they want to continue attacking our constitutional rights,” Nixon said.

Organizers said the rally was held because Florida is now the most expensive state to live in in the US.

May 1 is also the day of the worker so activists wanted to honor the workers and bring awareness to the lack of affordable housing.

Activists thought it was ironic that city workers came to sort of evict them from their own rally.

“That couldn’t have been more symbolic than them basically staging an eviction at our rally for affordable housing so I think they did us a favor painting the point we’re trying to make,” Shayne Tremblay said.

It’s worth noting that the rally remained peaceful even as city workers came and removed the furniture. The activists said they actually helped them out by removing their props for them.