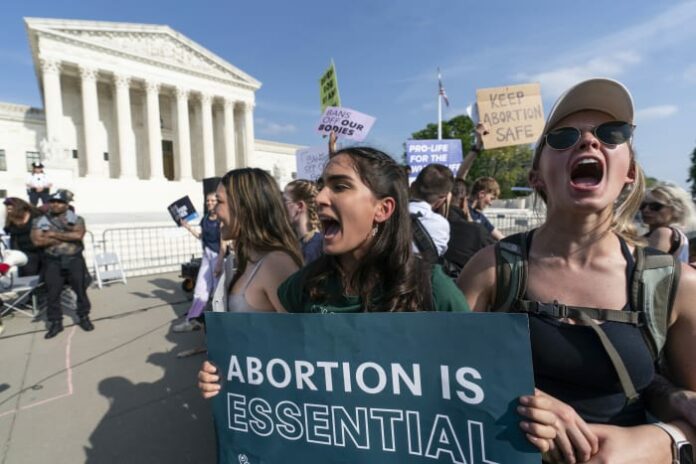 WASHINGTON – The traditionally insular Supreme Court is about to face the full force of public pressure and abortion politics as justices make a final decision on whether to throw out the landmark Roe v. Wade ruling.

Demonstrators gathered Wednesday outside the court, arriving every day since a Monday night leaked draft opinion suggested a majority of the justices are prepared to overturn the 1973 opinion that essentially ended the crime of abortion and ensured Americans could legally access the medical procedure.

Justice Samuel Alito appeared to be bracing for the onslaught, stiffening the spines of his conservative court colleagues as they review his draft and issue their final court opinion, expected in late June.

“We cannot allow our decisions to be affected by any extraneous influences such as concern about the public’s reaction to our work,” Alito wrote in the February draft document that was circulated to fellow justices.

However, the high court is entering a politically explosive new era, drafting one of the most consequential opinions on women’s health and religious freedoms in 50 years, all while a watchful public primed by the nation’s culture wars, looks over its shoulder and tries furiously to influence the final outcome.

At one point, more than 1,000 people flooded to the steps of the Supreme Court. In Los Angeles, police put the city on tactical alert after a confrontation between abortion rights supporters and police downtown. Fresh polling showed most Americans support preserving some access to abortion services.

“Let us fight with everything we’ve got,” Vice President Kamala Harris said in a speech at the EMILY”s List political action committee’s national conference.

While Democrats and other proponents of abortion access are fired up to defend Roe v. Wade, the pushing is far from one-sided. Republicans who have labored toward this moment for decades with efforts to fill the court with conservative justices — gaining three during the four years of the Trump administration — are determined to finally accomplish their goal.

Urging the justices to stick to their process, Senate Republican leader Mitch McConnell promised that senators would “have their backs, no matter what.”

In a televised speech from the Capitol just across the street, McConnell, who is a chief architect of a campaign to confirm conservative judges, encouraged the justices to “tune out the bad faith noise and feel completely free to do their jobs.”

The leaked draft gave Americans a rare, up-close sneak preview of the typically private, hidden deliberations of the high court, and the disclosure is propelling a public outpouring of opinion and protest reflective of the nation’s long debate over abortion policy — all in the run-up to the fall’s contested congressional elections.