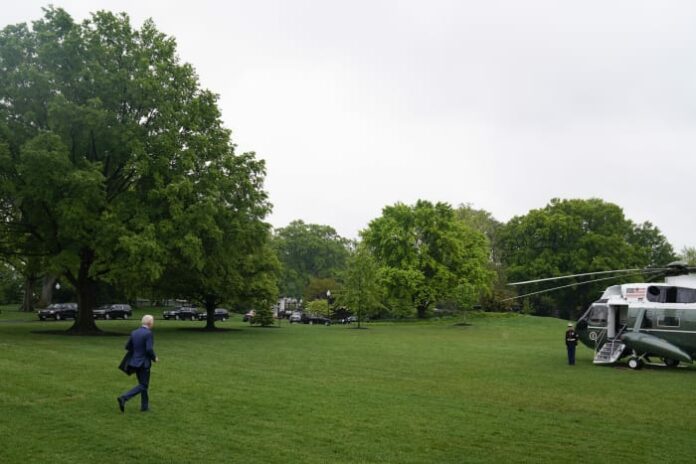 Despite lofty promises he’s made, from the campaign trail through his first year in office, he has limited power to safeguard voting rights or expand the fight against climate change on his own.

And now it’s become clear that Biden has no good options for preserving abortion access as the Supreme Court appears poised to overturn Roe v. Wade.

It’s a disorienting and discouraging state of affairs for Democrats, who control both Congress and the White House for the first time in more than a decade.

But the reality is the party holds only the narrowest of majorities in the Senate, and there simply aren’t enough votes to guarantee abortion rights, especially with the filibuster in place.

Biden’s pledge to codify Roe v. Wade into law seems destined for the same rocky shoals where other parts of his agenda, like tax credits for clean energy or legislation that would preempt state voting restrictions, have already run aground.

Senate Majority Leader Chuck Schumer has scheduled a vote on abortion for next Wednesday, but it’s almost certain to fail. Republicans are united in opposition, and a handful of Democrats may not support it either.

The impasse is forcing the White House to reopen its backup playbook — scrounging for ways to make a difference through executive action or regulatory steps while criticizing Republicans for the lack of broader action.

“The White House is under enormous pressure to be more forceful and vocal,” said Lawrence Gostin, who runs the O’Neill Institute for National and Global Health at Georgetown Law.

But Gostin, who is advising administration officials on next steps, said, “Biden needs to stick with winnable battles” by focusing on “low hanging fruit.”

One of those ideas involves making abortion medication more accessible by mail. The Food and Drug Administration has already eliminated the requirement to pick up the pills in person, and Gostin said the practice will need an aggressive defense as it faces conservative attacks.

The Justice Department has already gone to court over abortion access, suing Texas last year in an effort to stop a law that would ban most abortions.

Another concept, Gostin said, would be allowing Medicaid to pay for travel if a woman can’t get an abortion in her own state. Such a plan might run afoul of the Hyde Amendment, which bans federal funding for abortions, so it would require careful wording.

For example, the policy could say Medicaid would pay for travel for authorized medical treatment if it’s not legal where the patient lives — making no mention of abortion.

None of these proposals are foolproof, and they will likely face Republican challenges in the courts or through legislation.

These kinds of administrative steps are similar to what Biden has done when other initiatives have stalled on Capitol Hill.

On voting, for example, he signed an executive order intended to make it easier to register, and the Justice Department is ramping up its efforts to protect ballot access.

In addition, Biden included some climate policies in the infrastructure legislation that passed last year, and regulators are strengthening rules on vehicle emissions.

“The president is incredibly proud of what he’s already accomplished in 15 months of his presidency,” White House press secretary Jen Psaki said Friday.

Asked about Biden’s struggles on Capitol Hill, Psaki pointed to his long experience as a senator.

“He knows and understands it sometimes takes more time than he would like to get your agenda forward,” she said.

However, abortion stirs even greater passions than other issues across the political spectrum, and frustration about inaction is bubbling up.

California Gov. Gavin Newsom, who wants his state to become a refuge for people seeking abortions, said this week that Democrats are falling short.

“Where the hell is my party?” he said. Abortion opponents are winning, Newsom added. “We need to stand up. Where’s the counteroffensive?”

Cecilia Muñoz, a senior adviser at New America, a left-leaning think tank based in Washington, said in an interview earlier this year “there’s an assumption that the president has a magic wand that he doesn’t always have.”

She saw that firsthand as director of President Barack Obama’s Domestic Policy Council, when the White House increasingly relied on executive actions to make progress toward its goals despite Republican opposition.

“I think the advocacy community has gotten used to the idea that there are shortcuts,” she said. “But there are no good shortcuts.”

“The American people are used to relying on the courts to protect their fundamental freedoms,” she said. “And now we really have to get folks used to shifting their attention to legislators, members of Congress, legislative bodies. And that’s going to be a little bit of a culture shock and a little bit of a shift in the way we think.”

Democrats seem likely to lose control of Congress in the November elections, especially with Biden’s sagging approval ratings. However, some hope that the Supreme Court decision will fire up their voters.

“What you’re looking for in politics is an opportunity,” said Cornell Belcher, a Democratic pollster. “There’s an opportunity that wasn’t there before this came out.”

Michael Beschloss, a presidential historian, compared Biden’s situation to President Harry Truman, who was floundering as he ran for reelection in 1948. He turned his campaign into an indictment of a “do-nothing Congress,” which was controlled by Republicans at the time, and he managed to pull off a narrow victory.

The goal, Beschloss said, is to “take a bad hand and play it perfectly.”

Biden is trying a similar tack ahead of the midterms, escalating his criticism of other Republican proposals.

He repeatedly points to a blueprint from the National Republican Senatorial Committee that would increase taxes on people at the lower end of the income scale and force federal programs like Social Security to be reauthorized every five years.

And he warns that Republicans won’t stop at abortion and could target other rights that were earned through the Supreme Court, such as access to birth control or same sex marriage.