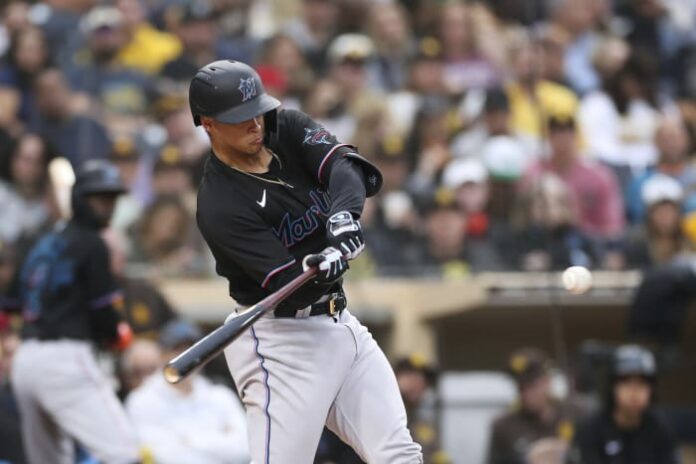 SAN DIEGO – Joe Dunand, the nephew of Alex Rodriguez, homered on the third pitch he saw as a big leaguer and then doubled as the Miami Marlins beat the San Diego Padres 8-0 Saturday night to end a six-game losing streak.

Dunand hit a 1-1 pitch from left-hander Sean Manaea into the first row in left-center with one out in the third just hours after his contract was selected from Triple-A Jacksonville.

Dunand is 695 home runs behind his uncle, who is fourth on the all-time list after a career tainted by steroid use.

Dunand was promoted from Triple-A Jacksonville after Jon Berti was placed on the injured list. Dunand had been on the taxi squad for this trip through San Diego and Arizona. He started at third base and batted ninth.

The 26-year-old Dunand doubled to left in his second at-bat and scored on Garrett Cooper’s two-run double.

Soler’s grand slam highlighted the five-run ninth against San Diego’s bullpen. It was his fourth homer this season. Jazz Chisholm Jr. had an RBI double.

Lopez (4-1) shut down the Padres on five hits while striking out five and walking two. He has a 1.00 ERA after six starts.

The Padres were shut out for the first time this season.

Manny Machado singled in the Padres first to extend his on-base streak to 17 games.

Manaea (2-3) allowed three runs and seven hits in six innings, struck out eight and walked one.

Machado’s .382 average and .458 on-base percentage are the best in baseball and teammate Eric Hosmer’s .371 average and .451 OBP rank second. It’s the first time two teammates were ranked first and second in both categories after a team had played at least 27 games into a season since Pee Wee Reese and Jackie Robinson of the Brooklyn Dodgers led in both categories through May 23, 1951, which was 34 games into that season.

Padres: RF Matt Beaty came out of the game after making a diving attempt at Miguel Rojas’ double in the second. … Placed LHP Tim Hill on the 10-day IL, retroactive to Thursday, with left shoulder inflammation and recalled LHP Ray Kerr from Triple-A El Paso.