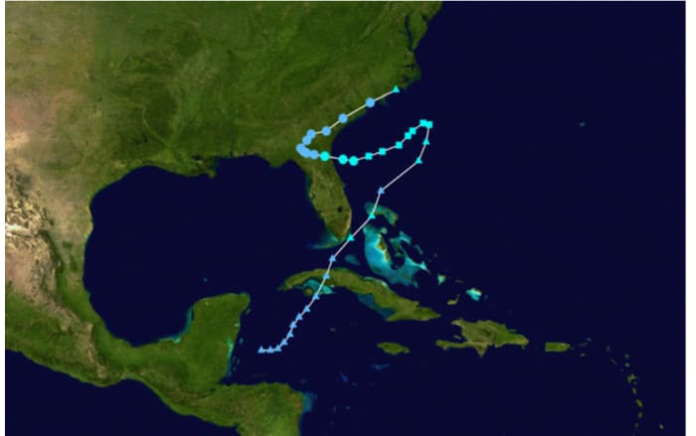 ORLANDO, Fla. – May has proved to be a time where tropical cyclone development can be a thing.

Looking at the last 10 years, there were eight named storms and a couple of those made landfall in Florida.

Of the eight tropical storms, Beryl in 2012 and Alberto in 2018 were the two to make landfall in the Sunshine State. Let’s take a closer look at these two.

On May 26, 2012, Tropical Storm Beryl formed from an area of low pressure just off the eastern seaboard of the U.S.

While the system was subtropical, it quickly gained tropical storm status just 1,200 miles off the coast of north Florida. With peak winds of 70 mph, on May 28, Beryl made landfall in Jacksonville and quickly weakened to a tropical depression. Although it weakened rapidly, the storm was a slow mover and dumped 2-4 inches of heavy rain from Jacksonville all the way to eastern North Carolina.

According to the National Hurricane Center in 2012, Tropical Storm Beryl was the strongest off-season Atlantic tropical cyclone to make landfall on record in the U.S. As the system moved through the southeast, it produced an EF-1 tornado that damaged 67 homes and 3 modular homes in North Carolina before dissipating on May 30.

By May 27, the system had other plans. It had strengthened, turning into a tropical storm just 100 nautical miles south-southwest of Apalachicola, Florida. After Alberto became a tropical storm, it raced toward the panhandle losing a little wind strength right before making landfall with peak winds of 50 mph near the Bay County/Walton County line on May 28. Alberto weakened to a tropical depression by the 29th but not without causing some damage.

Storm surge peaks measured 3.08 feet above normal tide levels in Apalachicola, Florida. According to the National Hurricane Center the combined effect of the surge and tide produced inundation levels of 1-3 feet above ground level from the coast of the panhandle all down the west coast of Florida.

Rain came in buckets with a whopping six-day total of 11.80 inches reported at Taylor Creek on the northern shore of Lake Okeechobee over a 5-day period of time. Massive rainfall totals even added up in northeastern Georgia to 12.30 inches and even 12.21 inches near Jonas Ridge in western North Carolina. Five to eight inches of rainfall accumulated from the Carolinas all the way north to Virginia. There were eight deaths that occurred from Alberto in the U.S, five in North Carolina and three in Virginia. Wind and water damages totaled $125 million.

The point is being prepared early for hurricane season is never a bad thing. While May isn’t as active as other month for Florida, history proves it can happen earlier than you think. Planning ahead is the best way to stay safe.