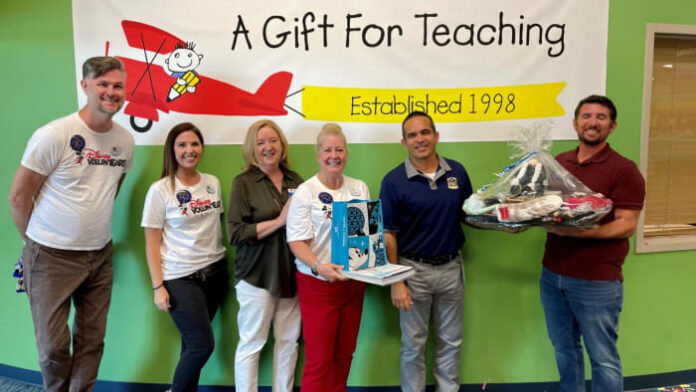 ORLANDO, Fla. – With the help of Disney volunteers, the Central Florida nonprofit organization A Gift for Teaching, surprised its 350,000th teacher shopper.

William Torres, a math teacher at University High School in Orlando, said not all the items needed throughout the school year are provided to him.

Torres told News 6 that he’s been getting some of those missing supplies from the nonprofit since 1999.

“For math for example, they have rulers, sometimes they have calculators,” he said.

Torres, a father of three, said every day he experiences students coming to class without essential items, and has had to dig into his own pockets to make sure his students are prepared.

“Right now, the national average is about $1,000 a year that teachers are spending of their own money,” said Angela García, VP of developing and marketing. “It can be difficult for them to do that, but they want to provide for their students, and they want to make sure that everyone has equal access to the same learning materials.”

In 1998, A Gift for Teaching opened its doors in Orlando and welcomed 84 teachers from Orange County Public Schools to shop for free.

“Recently a teacher told us how really accessing school supplies is the difference between success and failure, and having those supplies is really what allows them to leave with the knowledge and the access to be successful in school,” García recalled.

The organization was founded by community philanthropist Gary Landwirth, and since its inception, the nonprofit has opened two teacher supply stores available in Orange and Osceola counties that offer all sorts of items teachers need to make a successful school year for their students.

For Torres, it’s a passion he hopes to continue until it’s time to retire.

“I always said that will be the last thing that I’ll do with my life and that’s what I’ve been doing,” Torres said.

The celebration also marked another important milestone for the nonprofit. Since its founding, A Gift for Teaching said they’ve distributed more than $150 million worth of school supplies in more than 300 public schools in Orange and Osceola counties.

To learn more about A Gift for Teaching or to make a donation, visit the group’s website.