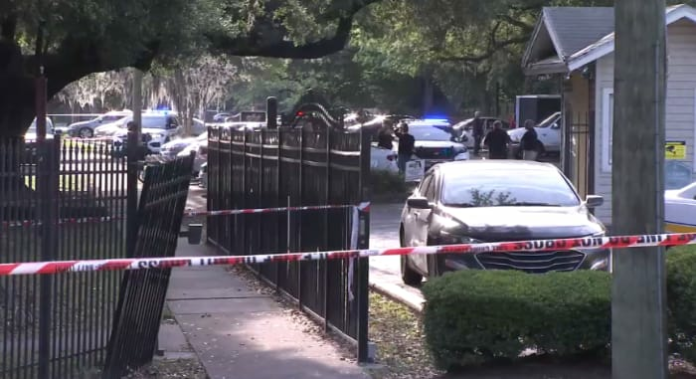 JACKSONVILLE, Fla. – An 8-year-old boy was a witness in the shooting death of his mother, his aunt and his uncle inside an Arlington apartment complex, a newly released arrest report shows.

The boy’s father, 37-year-old Terrell Lewis, is now charged with three counts of second-degree murder in the triple homicide at the River City Landing Apartments last week. He was ordered to be held without bond when he appeared before a judge on Saturday.

Relatives said the boy’s mother Johnisha Williams, her brother, 30-year-old Jordan Williams, and her sister, 28-year-old Jamonica Williams all died in the shooting.

MORE: ‘They were always together’: Family identifies mom, 2 siblings killed in Arlington apartment

Johnisha’s 8-year-old son was found safe by authorities after they said Lewis, her boyfriend, kidnapped him following the shootings — which prompted an Amber Alert. He was found about two and a half hours after the alert was issued when someone spotted the car from the Amber Alert and called 911. JSO was also able to trace Lewis’ cellphone to find his location, according to the report.

According to multiple sources, the boy was inside the apartment at the time of the shooting and was eventually interviewed by the Child Protection Team.

RELATED: Domestic violence can be spotted in these ways, according to expert

Lt. Mike Silcox, with JSO’s investigations division, said officers were called about 7:30 a.m. to a welfare check at the apartment complex after a 911 caller said a neighbor heard an argument and a loud noise.

JSO said it found a gun inside the apartment but it belonged to one of the victims and was not the murder weapon, which JSO said it is still looking for.

News4JAX learned Lewis was named in a 2016 domestic violence injunction obtained by Johnisha when their son was 2 years old.