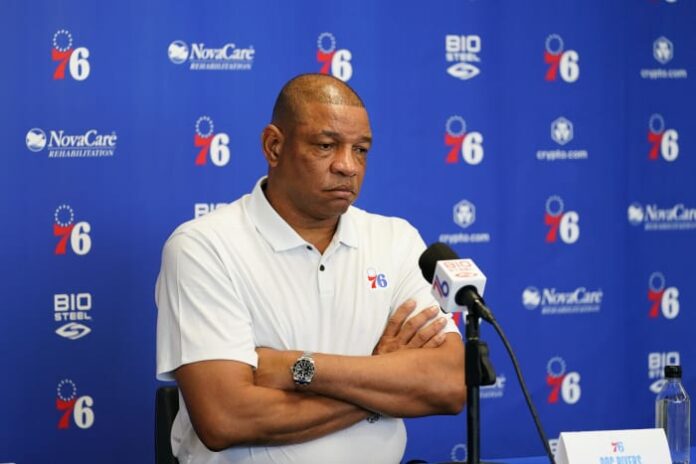 PHILADELPHIA – The first piece of the 76ers’ offseason is set: Doc Rivers will return to coach next season, early exits and all. Another question mark seems somewhat settled, James Harden wants to stay in Philly and the Sixers want him back. All signs point to yes, but no deal — one that could be worth nearly $50 million next season — is guaranteed.

Outside of NBA scoring champion Joel Embiid and Tyrese Maxey, the rest of the roster is fair game headed into another offseason following a second-round exit, this one in six games to the Miami Heat.

The Sixers lost in the Eastern Conference second round four times since 2018 — once as a No. 1 seed — and were swept in the first round in 2020. They haven’t advanced past the second round since 2001 and only twice (1985 the other) since winning their last NBA championship in 1983.

Ten years ago, the Sixers were the plucky underdog that knocked off the top-seeded Bulls to reach the second round. Tired of the early exits, the 76ers soon launched the tirelessly debated Process that yielded Embiid but not much else. The Sixers aren’t about to start again, not with Embiid still in his prime, the Wells Fargo Center packed nightly, and a core that theoretically has pieces that could shape a contender.

Under owners Josh Harris and Dave Blitzer, team president Daryl Morey and Rivers, can this franchise ever win a championship, at least while Embiid is under contract through the 2026-27 season?

“We’re right there,” Rivers said Friday. “We’ve put ourselves in the argument.”

Like, why is Rivers coming back? Is Harden worth a max deal? Whose fault is it that Embiid can’t stay healthy?

And there’s this debate, brought back to life after the Heat smoked the Sixers in Games 5 and 6: How could the Sixers have ever let Jimmy Butler go after the 2019 season?

“Tobias Harris over me?!” Butler, the former 76ers guard, said as he walked into Miami’s locker room.

The Sixers have settled into a comfortable routine of 50 wins, a top-half seed in the Eastern Conference, and letting them go as far as Embiid can take them.

“We have one of the best, if not the best, players on the planet,” Morey said. “We have to do more. All of us.”

No player will have to do more next season than Harden. The crazed excitement and all those fake beards fans wore when the Sixers acquired Harden from Brooklyn for Ben Simmons faded in a hurry. The Sixers realized in a heartbeat — and fans watched in horror in the playoffs – that Harden was no longer the three-time scoring champion, former MVP Harden. Rather, the Sixers acquired a 32-year-old diminished Harden who came up empty against the Heat. Harden had four turnovers, four baskets and did not score in the second half in the Game 6 loss.

“We all know he’s a very skilled player,” Morey said. “We’ll figure out how to use him.”

Morey and Rivers used the usual caveats that a full offseason program and training camp will help the Sixers better figure out how to use Harden. Morey said the Sixers could thrive with Harden “if we can unlock what he brings us.”

So here’s the hiccup. Harden has a $47.4 million player option for 2022-23 and, should he pick it up before July 1, would be eligible to sign a max contract extension for nearly $223 million through the 2026-2027 season. Harden said after Game 6 he would do “whatever it takes to help this team continue to grow,” meaning he could opt out of his deal and agree to return for less money. OK.

Morey said Harden is in next season’s plans.

“That’s been the plan since the trade,” Morey said.

Rivers has drawn the ire of Sixers fans in just two seasons on the bench. Rivers has been blamed for everything from hastening Simmons’ messy departure to odd lineup decisions to keeping Embiid in late in a Game 6 win over Toronto. The All-Star center suffered a mild concussion and right orbital fracture that kept him out of the first two games against the Heat.

“I just think he’s a great coach. I love working with him,” Morey said. “I feel like I’m learning from him. I think Elton (Brand) and I and him make a great team and we’re going to see where this journey takes us. But we feel very good about where it’s going to take us. It’s going to be where we have a very good chance to win a title.”

But Harris, Embiid and Georges Niang were among the players critical of the 76ers’ mental fortitude when times got tough against the Heat. Rivers said he was aware “the toughness word has come out a lot over the last 24 hours” and said there are “weaknesses, clearly, that we have to improve.” That could mean trades but a potential chip in Danny Green likely came off the block when he suffered tears of the ACL and LCL in his left knee early in Game 6.

Embiid was the league scoring champion and gutted out the playoffs with torn ligaments in his right thumb, playing with a mask to protect his broken face and the lingering effects of a concussion. He also suffered a meniscus tear in his right knee in last year’s playoffs.

“Right when the thumb happened, I’m a realist, you knew that was going to be a struggle,” Rivers said. “For your best player two years in a row to have to go and play in the playoffs not being right is difficult. It really is. And that’s where obviously we need to just make sure we support them and keep giving them more help. So when those things happen we can still steady the fort.”