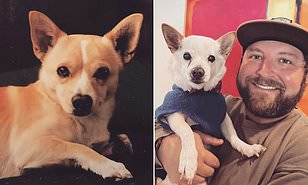 A 22-year-old rescue pup has been crowned the oldest living dog on Earth.

Gino, who lives in Colorado with his owner Alex Wolf, 40, was awarded the impressive title by Guinness World Records earlier this month.

The happy pooch was born in 2000 and later rescued by Alex, then an university student in California, in 2002, Today reported.

Gino has lived way beyond the average lifespan for a smaller dog, which is estimated between 10 and 13 years.

The title of the oldest dog to have ever lived is still held by Bluey, an Australian cattle dog who lived to 29 until he was put to sleep in 1939.

Alex found Gino, then named Pee-Wee, at the Humane Society of Boulder Valley in California and said the pup soon became ‘one of the guys.’

The pup would stay up to greet his owners after a night out and would hang around the house with them if they had guests over.

‘When he was younger, he used to love exploring my parents’ huge backyard with our other dogs in Manhattan Beach, going on walks off the leash in Venice, going on drives along the coast blasting music with his head out the window, or running around on the golf course in La Quinta,’ he added.

Nowadays however, he is happiest napping by the fire, and going on rides around the neighborhood in a special wagon Alex pushes for him.

The dog lover joked that in spite of weighing just seven kilos, Gino has ‘big dog energy’ and has a fearless streak.

He thanked Gino for being by his side through all of his major milestones, from getting a job to buying a house, and meeting his girlfriends Rebecca Grenell, who is one of the pup’s biggest fans.

Alex credited Gino’s longevity to a healthy diet and lots of love and support, but said he thinks the pup’s old age is down to the fact that he is a ‘strong dog.’

He added that Gino, whose eyesight has become diminished with old age, always attends his veterinary appointments to make sure he is in the best shape possible.

The dog lover said he hopes that Gino’s status as oldest living dog will help him raise money and awareness for pet adoption and activism.

He added he feels it would be a fitting legacy for Gino to leave behind.

Alex also added that Gino’s story proves that pets are indeed for life, something anyone thinking of getting a pet should consider.