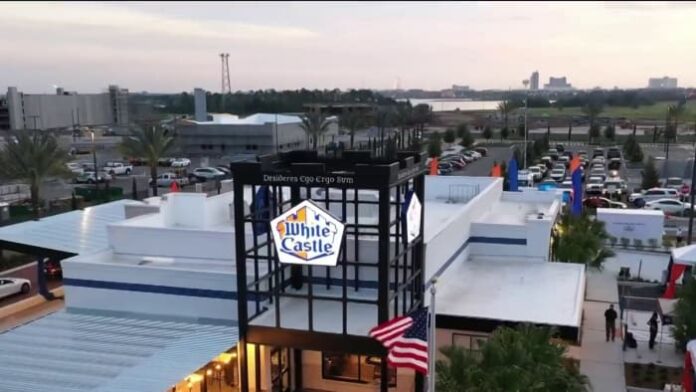 In May of 2021, White Castle opened its largest free-standing fast-food restaurant in Orlando. It’s located on Daryl Carter Parkway, west of Interstate 4, smack dab in the between Disney World and Universal Studios. On opening day, cars lined up as far as the eye can see.

Fast-forward a year later and Craver Nation continues to keep that location busy. Cranking out about five million sliders to date, making the Orlando location the top performer among White Castles’ more than 350 restaurants worldwide.

“When we saw this opened, we were like ‘yes!’ We’ve been trying for a year to get in here. We come to Lake Buena Vista two or three times, every time we came since it opened there were lines and cops and we finally got in here for lunch,” said Aileen Jennings.

I asked diners what was so special about the White Castle sliders.

“The texture and the taste, it’s very good,” said one man.

“They’re soft and the burgers are juicy,” said a woman.

The small size of the sliders make it easy to chow down on several without getting stuffed.

And the staff in the kitchen have the slider assembly down to a science to keep up with demand.

“It’s a fast-paced job, but you have to love to do it. Customer service has to be on point,” said Manager Aaron Johnson.

Behind the counter, Johnson said White Castle has helped him build a career.

”When I saw the job openings, it had great benefits and looked like it was a growth opportunity job and it played out to be. I applied as a team member. A month and a half later I got promoted to team manager,” said Johnson.

Johnson took News 6 Insider Guide Crystal Moyer into the kitchen to get an ‘In-slider’ look at how the burgers are made.

It all starts with a few scoops of chopped onions, spread into a thin layer on the griddle.

“We sauté the onions as they cook right here,” said Johnson.

Then the burgers are placed on top. Forty at a time.

“Do you see the holes in the burgers? That’s to help them steam. They cook all the way through that way without us having to flip them,” said Johnson.

Add some seasoning, and then the buns are tightly stacked on top to insulate the burgers and start the steaming process.

Then the sliders are assembled and toppings are added. At this point, it’s all about speed.

“As long as the slider stays closed, it keeps its warmth so you want to be quick with it. Pickle, cheese, pickle, cheese,” said Johnson.

The sliders are packed into the Craver Case and ready to go.

There’s a lot going on week celebrating its opening day anniversary. If you are a member of Craver Nation, you can get a free eight-piece birthday cake while supplies last. You can also round your order up to the next dollar to donate to Second Harvest Food Bank of Central Florida.

The opening of the Orlando Castle — the largest free-standing White Castle in the world — marked the beloved brand’s return to Florida since operating four restaurants in Miami in the 1960s.

In addition, and in response to the overwhelming popularity of the Orlando location, White Castle plans to launch online ordering with pickup and delivery service out of approximately 1,800 square feet of in-line space located directly behind the Orlando Castle. When ordering online, customers can opt to pick up their orders by parking and entering the new store or have one of four delivery partners (DoorDash, Uber Eats, Grubhub and Postmates) bring the Crave to their door.

Dine-in, take out and drive-through options will continue to be available at the adjacent Castle. The new in-line store adds to the existing White Castle Virtual Kitchen located at 18 N. Dollins Ave. near downtown Orlando in operation for online ordering, delivery and carryout service.