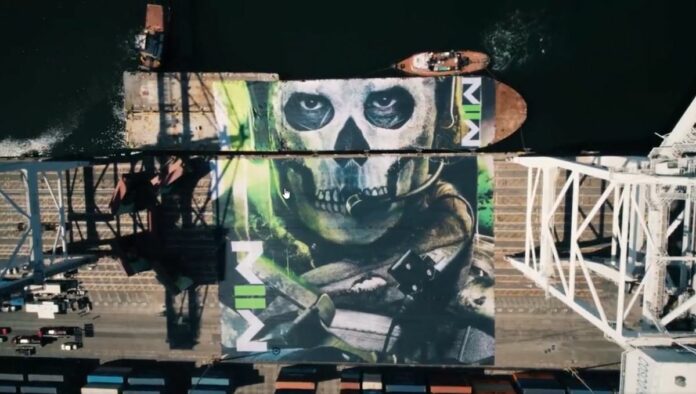 The official Call of Duty twitter account announced the date with a weird video following a container ship with a mural of the masked series protagonist/mascot Ghost on the deck. Zooming around while vaguely tactical pronouncements follow the camera, we get to check out close-ups of a few others before we see the ship docking with a port to complete the full mural. I’ve never been more excited for tactical shipping action than this moment.

Serving as a sequel to the honestly pretty good Modern Warfare reboot from 2019, it’s been hinted that we’d be getting the newest Call of Duty entry this year. I’m not sure how spooky Modern Warfare 2‘s story will be, but we’ll all be able to enjoy it alongside our pumpkins this year, and Ghost’s iconic mask is sure to get him full-size candy bars at my door. He won’t even have to take them at gunpoint.

Infinity Ward tweeted some Modern Warfare 2 splash art (opens in new tab) at the same time, which doesn’t reveal much new info, but certainly does show off more angles of Ghost being all tactical. Helpfully, the team at Infinity Ward have also revealed that Task Force 141 will be in a starring role, to include Ghost, John Price, Kyle “Gaz” Garrick, “Soap” MacTavish, and Colonel Alejandro Vargas.

The first of the rebooted Modern Warfare’s had some moral darkness in its storytelling, and definitely had some things to say. A lot has happened since 2019, but I’m hoping we see that storytelling trend continue. It’s been rumored that the campaign will see US special forces taking on Columbian drug cartels, which is certainly a pile of subject matter with a lot to talk about.